On Traditional Australian Pie Base

We all know that a great pie, first and foremost must taste good. The filling should be tasty, tender, moist, not too runny and not too thick but,

…it ain’t a pie if the pie crust just ain’t right!

I know this. You know this. We all know this, so why is it so hard for so many businesses to get their pie crust or pie base right? (AND, why has it been so damn difficult for me to find out about it and get it right?)

Baking is a skill, a skill that scares a lot of cooks because it’s so damn unforgiving of  the, ‘a pinch of this, a dash of that‘  approach to replicating recipes. It requires, rigour, discipline and an even tempered approach on a day to day basis. If you’re the Chef With Flair then you’re probably also, the Frustrated Baker.

Now to add to this, there are so many references to pie and crust on the net, God love the Americans, their indelible stamp has been tramped all over the place making it hard to find any REAL information of value on this topic – pie is made with sweet shortcrust, or its a pizza, and savory pie is a pot pie which has a puff pastry top only… This is truly war of culture, through domination of the available global information on every topic.

Be that as it may, it is finally clear to me that of the little information that is around, this is one area that bakers, commercial bakers that is, are happy to let it slide, i.e. if you haven’t done the apprenticeship, than you just dont know and if you have, well its basic knowledge that everybody, who ought to know, knows, right?

So, here’s a basic run down of Pie Crusts, and a lead into that mysterious iconic pastry known as ‘Pie Base.’

Pie crust is a pastry made basically with flour, fat and liquid. The difference in various types of piecrust pastry depends on the nature of the flour, the nature of the liquids, the nature of the fat, the ratios in which they are combined, AND the way in which they are combined. In Puff Pastry, the fat and flour is folded and layered, a bit like Damascus Steel, and bound with a scant bit of liquid so that when it is baked, if puffs up into a light flaky, crisp crust. In Shortcrust Pastry, the fat and flour is crumbled together like sand or gravel before being bound together with the liquids, creating a denser, textured pastry. The smaller the grains of fat and flour, the ‘shorter‘ the pastry.

Pie Base is a short pastry. It is unlike hot water pastry and it is not like the typical shortcrust pastry known to loving grandmas the world over, either. It is made by what is referred to as the ‘Creaming Method‘ – a method that has been documented, and known to bakers, since at least the turn of the 19th Century – (p336). This method is an alternative method for making pastry, particularly in hot, arid climates.

In essence this method has part of the flour and all of the fat creamed together first with the water until ‘clear‘ and then the final pastry dough is adjusted with the remaining flour, usually by the experienced touch of a skilled Baker. Understand this well, instead of the flour and fat ratios being fixed and the water ratio being variable, here the fat and water ratios are fixed and the flour ratio is varied until the desired result is achieved.

Now, what does ‘clear’ mean? That is hard to explain in words and is something better shown. To get a close idea about this I recommend you look up a few Youtube Videos on a French technique for kneading wet doughs, currently known as the so called “Bertinet Method.’

Here is a method I gave to a friend of mine in New South Wales, after being having my eye opened and being properly educated by a couple of great bakers on the Apple Isle. 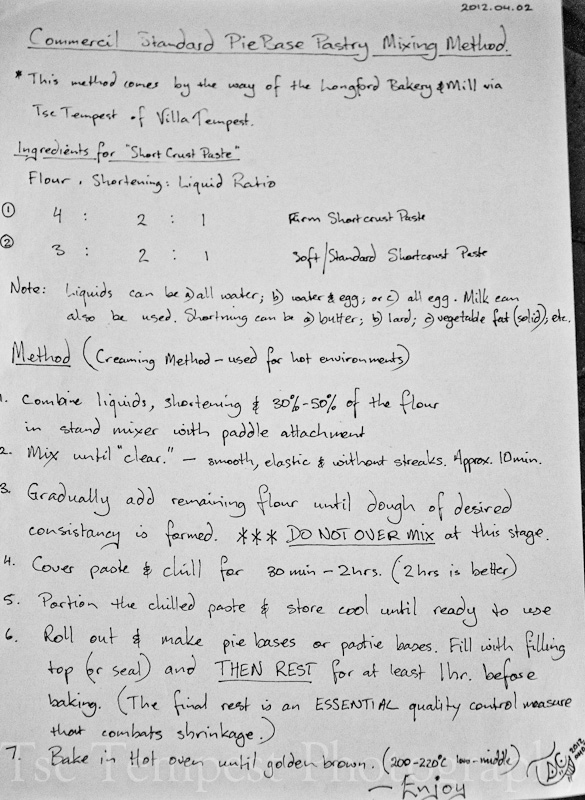 Do give it a try and see how this works for you. For me, this marks the end of a long, long search for the Secret to Traditional Australian (Commercial) Pie Base, and the begining of a, hopefully, even longer time of playing with the technique.

Category From The Kitchen | Tags: